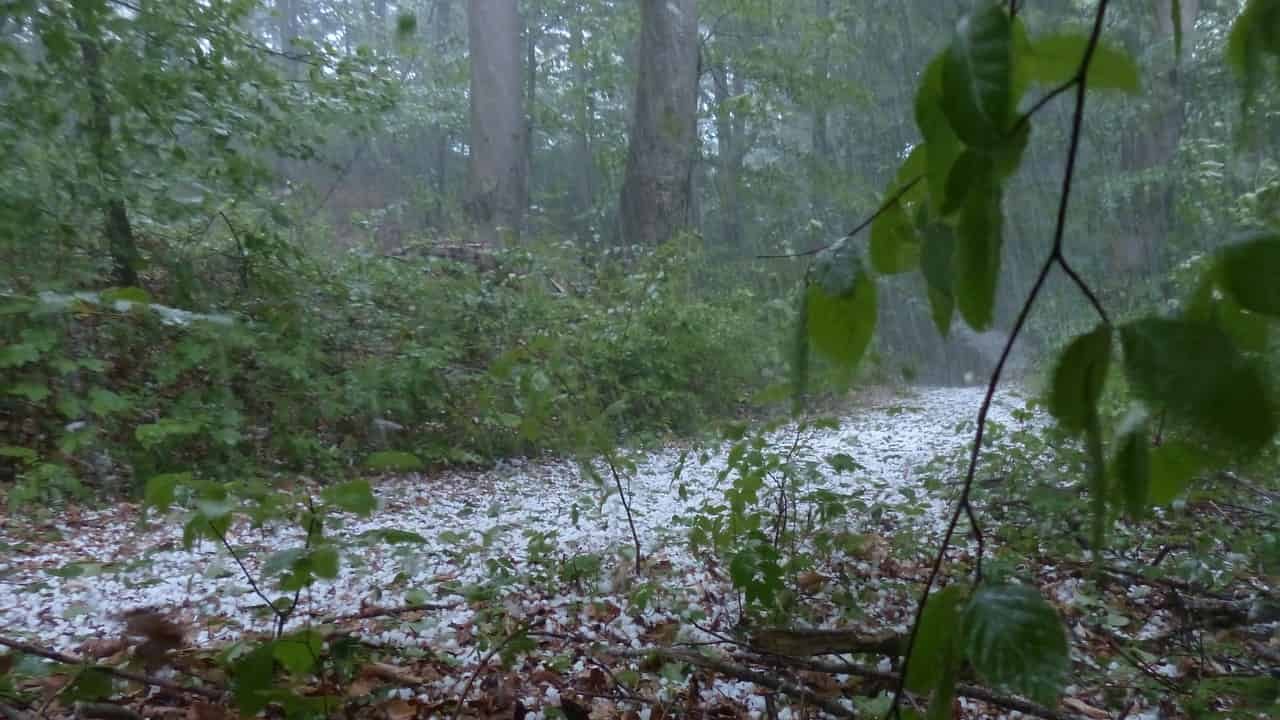 Can Hurricanes Cause Hail? The Facts Explained

Hurricanes are formed when warm moist air over the water begins to rise. As it rises, the air is replaced with colder air, and this process continues until large clouds and thunderstorms start. Then, the question that comes to mind is whether hurricanes can cause hail.

Yes, hurricanes can cause hail, but it happens very rarely. Hails do not reach the surface during a hurricane because the freezing level is very high in it. Thus, even when hail is produced, a hurricane’s warm temperatures usually melt it before it reaches the ground.

Therefore, although hurricanes are very powerful, they cannot produce large hail or even sustain smaller instances. Keep on reading to find out more about why this is!

Why Is Hail Rare In Hurricanes

Hail is rare in hurricanes because the freezing level in hurricanes is too high, and there is variation in the wind environment. Let’s discuss these factors in more detail below.

The Freezing Level in Hurricanes Is Too High

A 500 millibar temperature above the freezing level occurs routinely in hurricanes, although it is scarce otherwise. This results in vast amounts of latent condensation heat and moist and saturated warm air inside a hurricane.

Consequently, the temperatures inside the core of a hurricane become very warm.

As hails are formed when raindrops freeze because of frigid temperatures, the conditions inside a hurricane’s core are unfavorable for their growth. These high temperatures will usually cause the hail to melt.

Variation In The Wind Environment

A hurricane’s lack of stability and wind environment are also reasons why hail cannot form there. Powerful winds blow the hail horizontally instead of their usual vertical fall. Consequently, hails fall to the ground slowly and are more vulnerable to melting.

Additionally, the updraft in a hurricane is not as strong as one part of a supercell thunderstorm that produces most hails. The energy of a hurricane’s updraft spreads over a large area, reducing its intensity. This results in fewer and smaller hail being formed.

Having detailed why hail is rare in a hurricane, the article will discuss conditions that lead to greater hail production.

How Is Hail Formed?

Hailstones are primarily formed when updrafts from a thunderstorm carry raindrops into high-cold areas of the atmosphere. As they freeze, they begin colliding with more liquid drops, which freeze onto their surface, making the hailstones larger.

Following this, hails fall to the ground when the thunderstorm’s updraft can no longer carry the weight of hailstones. This can either result from the hails getting too large or the updraft weakening. Additionally, when hailstones collide with different temperatures and atmospheric liquid conditions, clear and cloudy ice layers grow over them.

However, these layers are not just a result of this up-and-down interaction. This is because winds inside a thunderstorm are not just vertical; they are sometimes horizontal too. This causes hails to move in varying directions, altering their shape and form.

How Does Hail Reach The Ground?

When hailstones grow large enough, they can overcome the strength of the thunderstorm updraft that is holding them up in the atmosphere. Then, they start falling to the ground. Even the horizontal winds from the updraft are enough for minor hail to be blown away.

Therefore, more giant hailstones fall closer to the updraft than smaller hailstones. Moreover, hail may even fall to the ground at an angle if the winds near the surface are strong enough to change their direction.

When powerful winds blow hails, they may even break windows and get blown into houses, break the side windows on a car, break down fragile roofs, and cause severe injuries to people and animals in their way.

Furthermore, hails fall to the ground in paths called hail swaths. These come about when the storm starts to move while the hail is still falling. Depending on the size of the thunderstorm, hail swaths also vary from a few acres to an area as wide as 10 to 100 miles long.

How Fast Can Hail Fall?

This question has a complex answer. The speed at which hailstones fall to the ground primarily depends on their size, the friction between hailstones and surrounding air, the degree of melting of the hailstones, and the local wind conditions in the area where they are falling.

Even with these estimates, there is significant uncertainty in these speeds. This depends on the hail’s shape, its fall orientation, and the environmental conditions. Research has also reported that giant hailstones fall at over 100 mph.

Hailstones vary in size due to the different conditions in which they form. They are categorized into three types.

The smallest hailstones have a diameter of less than 1 inch long. We can use peas, pennies, nickels, and quarters to estimate hail size.

Medium-sized hails are the most common type and have a diameter between 1 to 1.75 inches. Ping-pong and golf balls are known objects to compare with medium-sized hailstones.

Large-sized hails the ones with the most cloudy and clear ice layers on them. Their diameter is between 2 to 4 inches. Teacups, softballs, and grapefruits can better estimate large hail.

Which Areas Experience The Most Hail?

As the United States is a vast country, the occurrence of hailstones varies in each region. Although Florida has the most thunderstorms, areas like Colorado, Wyoming, and Nebraska usually experience the highest hailstorms. These three states are often collectively referred to as the “hail alley.”

Although hurricanes comprise powerful winds, they are not cold enough to produce hailstones that often. The other conditions that are necessary for hailstones are mentioned above, including freezing cold temperatures and the wind environment.