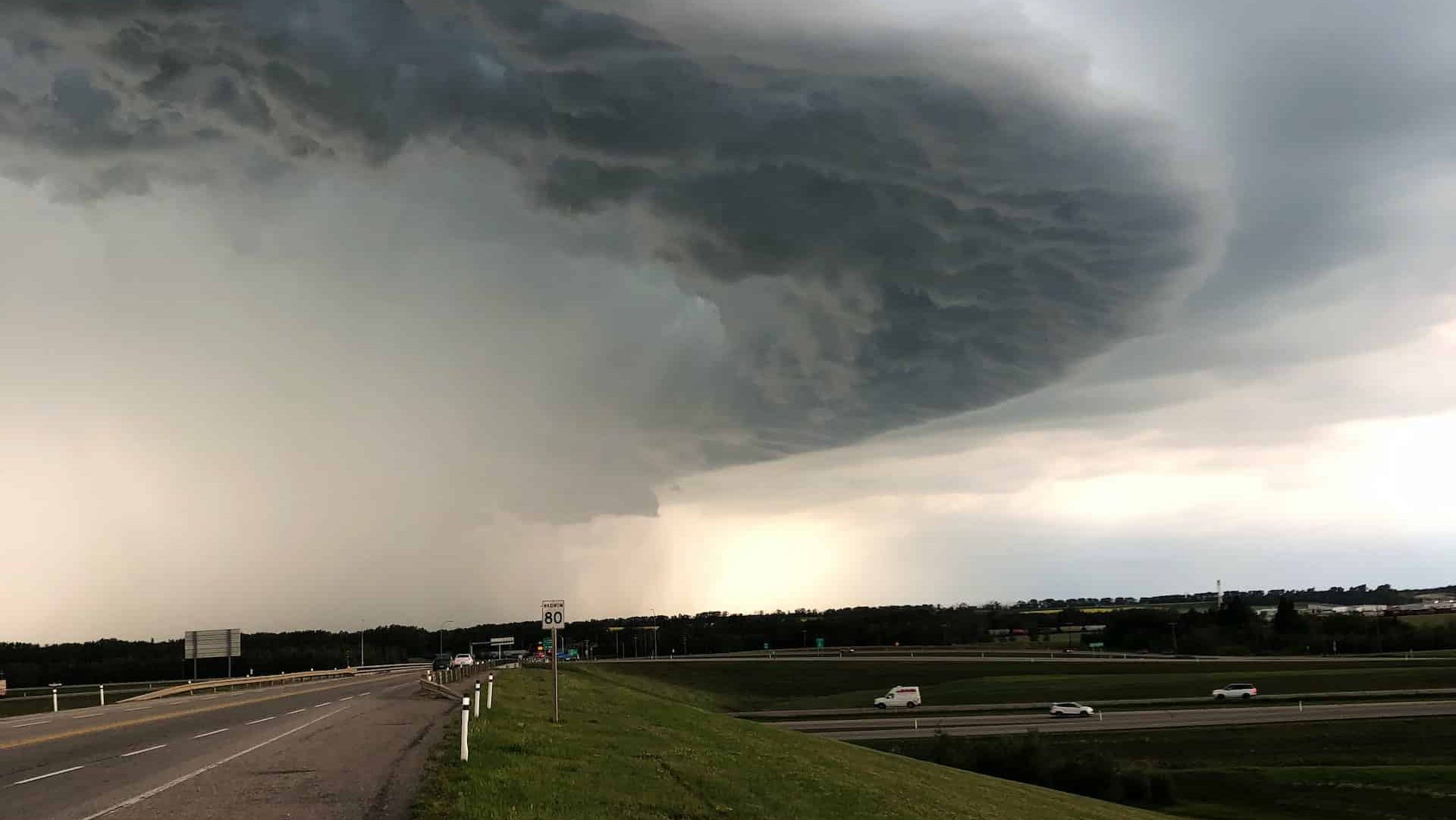 Can A Tornado Happen During a Hurricane?

There have been reports of tornadoes occurring during hurricanes in the past. In this article, we’ll assess this claim based on evidence to establish whether tornadoes can indeed occur during a hurricane. First, let’s answer the main question.

Yes, a tornado can occur during a hurricane. The amount of surface friction increases when a hurricane crosses land while the winds above continue to move quickly. This causes the wind above the ground to slow down. This is referred to as “wind shear.” One of the essential elements for the formation of tornadoes is wind shear, which refers to the shift in wind velocity and direction with altitude in the atmosphere.

Keep reading below as we take you through all the important information about tornadoes and whether they can occur during a hurricane.

What Is a Tornado?

Tornadoes can be defined as a column of air that is touching the ground and rapidly whirling; they are typically associated with the base of a thunderstorm.

The most dangerous storms in nature are tornadoes. Tornadoes, which are produced by intense thunderstorms, may kill people and destroy a community in a matter of seconds. A tornado’s winds can gust as high as 300 miles per hour.

Destruction pathways could be 50 miles long and more than one mile wide. The same thunderstorm may also produce powerful downburst (straight-line) winds. Because the thunderstorms that produce tornadoes are created amid atmospheric circumstances that are also quite inclined to produce hail, hail is frequently detected very near the tornadoes. This danger poses a considerable risk to every state.

While some tornadoes are completely hidden by clouds or adjacent rain, others are just partially visible. Tornadoes may form very rapidly and vanish much faster. Most tornadoes last fewer than 15 minutes on average.

Even when a vortex is not apparent, a mass of debris can identify a tornado’s position. A thunderstorm’s trailing edge is where tornadoes typically form. Behind a tornado, it is not unusual to find bright, sunny skies.

Difference Between a Hurricane and a Tornado

Extremely powerful horizontal gusts that spiral about their centers and a ring of powerful upward motion containing downward force in the core make up the characteristics of both tornadoes and hurricanes.

The circular wind speed is far higher in hurricanes and tornadoes than in radial inflow or vertical velocity.

In the northern hemisphere, hurricanes invariably spin counterclockwise, whereas tornadoes often revolve clockwise. The Earth’s rotational motion determines this pattern of rotation of the storms in every hemisphere. A tornado that spirals reverse from that hemisphere’s average direction might occasionally arise due to local winds.

There are scale-related variances too. Even though stronger tornadoes have winds that far outweigh stronger hurricanes, hurricanes normally inflict significantly more harm per storm, per season, and per area. Economically speaking, storms often do ten times more damage annually than tornadoes.

Due to their much bigger size, longer length, and broader range of ways to inflict property loss, hurricanes often cause far more overall harm than tornadoes. The destructive center of a hurricane can span tens of miles, endure for several hours, and produce wind, floods from storm surges, and from rainfall in addition to causing structural damage to buildings.

In comparison, tornadoes often have a diameter of a few hundred yards, last only a few minutes, and mostly harm property due to their strong winds.

Small-scale circulations, or tornadoes, measure well over a few hundred feet wide when they come to rest on the land. Most tornadoes originate from violent thunderstorms that form in the Central Plains of the United States throughout the spring and summer months. This region has strong wind shear conditions.

Many tornadoes result when the cool, arid air from the United States Northwest violently collides with the humid, hot air moving north from the Gulf of Mexico. There are several more places with pushing variables where tornadoes can originate. For instance, a storm that makes landfall may cause many tornadoes to develop.

Although tornadoes may have winds of up to 300 mph and wreak damage on the ground, they usually only last a few minutes and seldom move more than 10 or 20 miles. Neither the storms that produce them nor the atmosphere’s overall circulation is significantly impacted by tornadoes.

But on the other side, hurricanes are massive circulations that range in size from 60 to over 1,000 miles. Although they almost always occur between 5- and 20 degrees latitude, hurricanes never really develop on the Equator. In general, hurricanes occur at locations where the sea surface temperature is over 26.5 °C (76 °F) or above warm tropical oceans.

A hurricane may last for days or weeks and traverse thousands of kilometers. A hurricane will move a sizable quantity of heat from the ocean’s surface into the upper troposphere and even the lower stratosphere throughout its duration.

Even though this is still an ongoing topic of research, hurricanes do have demonstrable effects on the global atmosphere’s circulation despite their irregular formation.

Are Tornadoes a Result of Hurricanes?

Tornadoes can be produced when hurricanes hit land. In comparison to friction over water, where storms occur, friction over land is significantly stronger. The frictional force rapidly decreases as you move away from the ground.

The winds close to the ground slow down considerably whenever a storm approaches land, while the winds in the upper levels maintain their speed. A “wind shear” is the term used to describe this shift in wind course and velocity with height. As a result, an air column may start to rotate and produce a mild tornado.

Within 12 hours after landfall, hurricane-spawned tornadoes normally develop in the right front quadrant of the storm. The belts of rain are frequently interwoven with the tornadoes. Sadly, meteorologists can’t foretell whether a hurricane will create tornadoes.

The amount of damage a tornado causes, which is an estimation of the wind velocity of its whirling winds, determines the tornado’s intensity. According to the storm’s most severe damage, each tornado is given a unique value on the Enhanced Fujita scale.

This rating, which employs a collection of 28 indicators, including damage to farms, schools, and trees, is based on research by Professor Ted Fujita. Each tornado’s EF rating is based on how much damage it has caused. The EF0 tornado, which has winds of 65 to 85 mph and can only produce minor siding or pipe damage or tree part breakage, is the weakest kind.

There is a chance that one hurricane will be deadlier. 1,016 fatalities were attributed to Hurricane Katrina, per the National Weather Service. However, tornadoes often result in more fatalities, with an average of 56 each year. An average of 47 people die in hurricanes each year. Natural disasters are brought on by hurricanes alone, making even small tornadoes problematic.

After looking at all the facts, we can say that tornadoes can happen during a hurricane. More often than not, they are caused by it.