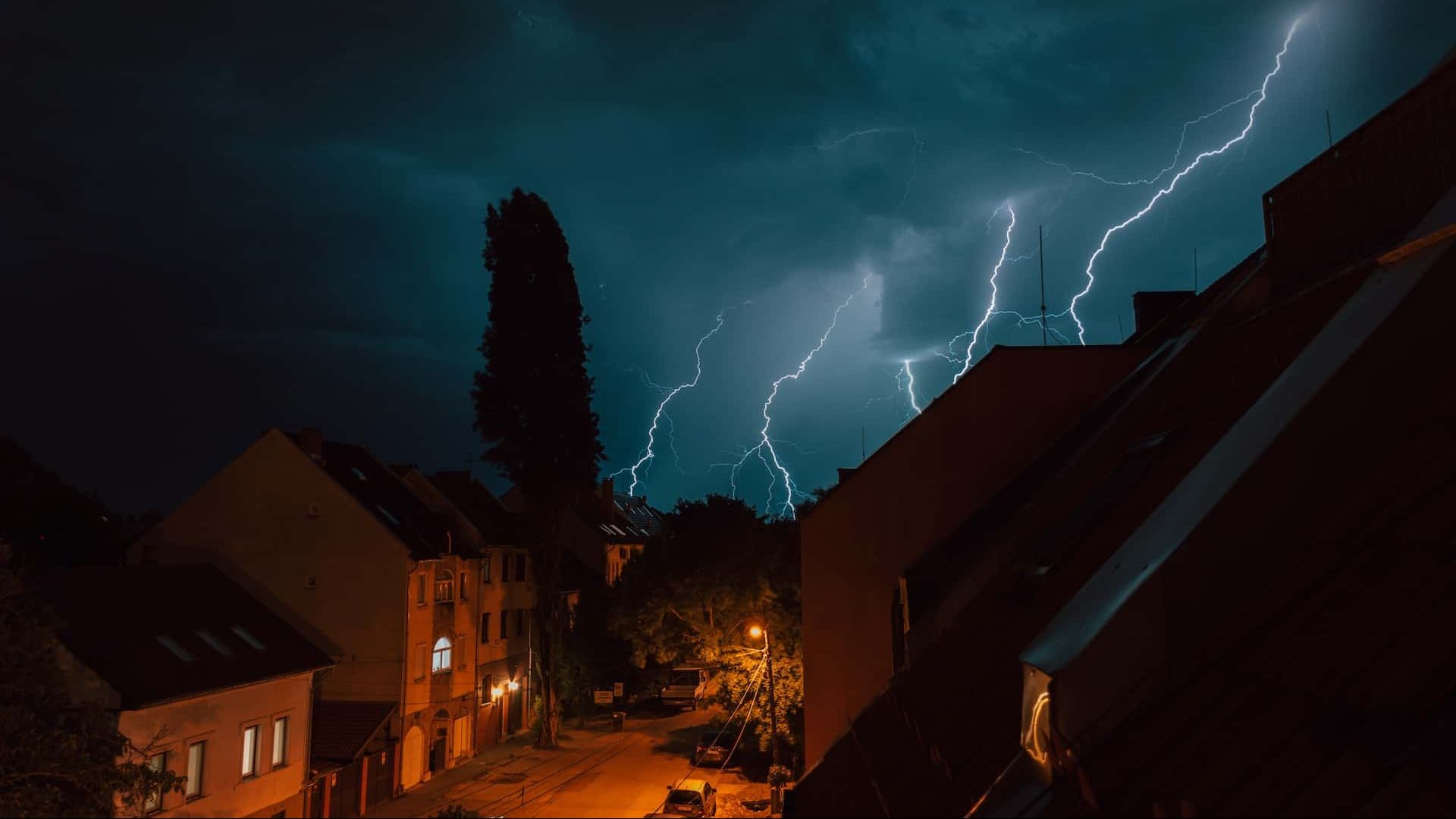 3 Signs Your House Was Struck by Lightning

Every year, lightning strikes houses and structures all across the world. When that occurs, it may seriously harm a house, including the roof, walls, gutters, chimney, and, if it hits hard enough, the foundation as well. It’s critical to be aware of any signs that lightning has struck your home so you can receive the necessary help. So, how do you tell?

Signs that your house has been struck by lightning include fire damage (sparks, etc.), shockwave damage (cracks or fractures in structures), and electrical damage (power surges).

The fact that lightning may still present a threat to the house for some time after it strikes it is arguably the most threatening aspect. Before we get into the signs your house has been struck by lightning, let’s talk about how light travels down the roof to other areas of your house.

How Lightning Travels Down Your Roof

Static electricity discharges as lightning. During a storm, air currents and moisture circulate within the clouds, causing the particles to charge up. Similar to connecting the positive and negative ends of a battery, a spark is created when negatively charged air and positively charged air from the earth contact.

This releases the accumulated energy and generates a lot of heat—lightning strikes reach temperatures of approximately 50,000 degrees Fahrenheit.

The roof is particularly vulnerable to lightning since it is the house’s highest point. As a result, a direct hit might result in a wide range of rooftop damages, such as damaged chimneys, fallen bricks, and cracked shingles. The depth of the damage, though, might not stop there.

It is simpler for the charge to move to the ground if there is something that can conduct electric currents, such as metal window frames, phone lines, cable TV or internet wires, gas and water pipelines, electric lines, and gutters. Once it locates a conductor, it may also branch out using more conductors, simultaneously electrifying several rooms in a house as it travels toward the ground.

The “side flash” phenomenon occurs when it occasionally “arcs” or jumps across the air from one conductive channel to another. For instance, lightning may strike the roof of a house’s gutters before moving on to window frames or better-grounded water lines.

The house may become susceptible to water damage even if the impact doesn’t result in any instant electrical damage or fire. No matter how tiny, a hole in the roof or structure might allow water to seep through the ceiling.

3 Signs Your House Was Struck by Lightning

Warm summer days and evenings are generally linked with thunderstorms. However, as many people have probably learned at some stage or the other, these storms may occur at any time of the year, even the depth of winter and, more frequently, spring, when the temperatures rise.

And like other storms, they have the potential to cause damage, the extent of which varies based on the strength of the lightning strike and the specific area of the property that is affected.

Fortunately, there are some signs you can look out for which will tell you whether your house has been struck by lightning.

Visible Fire Damage on the Roof

The most serious threat posed by lightning to your house is fire. Lightning bolts may heat your home’s roof, shingles, and attic to a temperature exceeding 50,000° F, which is high enough to start a huge fire.

A direct blow may even break through your shingles and into the attic below, damaging the insulation, electrical systems, and other components. Due to their high conductivity, metal gutters and water pipes on a roof increase the risk of fire.

Shockwave Damage to Your Home

One other clue that lightning has hit your home is shockwave damage. A lightning bolt may easily break stone, brick, cinderblock, and concrete when it strikes directly. The sheer power of a lightning strike may cause havoc on your chimney, leading to cracks, fractures, and perhaps even flying shrapnel. A direct blow may destroy the building.

Power Surge or Electrical Damage Inside Your Home

The wiring and complex components within your electronics can be severely damaged by a power surge, which essentially results in an electrical pressure overload in your house. Power will be out, and you might smell burning plastic or smoke.

How to Stay Safe from Lightning Strikes

Prevention is Better Than Cure

Try your best to be ready before lightning hits since prevention is always preferable when it comes to hazards concerning your house.

During a storm, it’s best to avoid direct contact with potential lightning routes. Avoid taking a shower, bath, or doing the dishes. A house is secure during a thunderstorm if you stay away from anything that conducts electricity.

Keep away from electrical devices, wires, TV cables, computers, pipes, and metal doors and windows. In the event of a surge, unplug electrical equipment. Even a landline phone should not be touched if it is still plugged in.

Keep the Trees Away

Change your roof’s shingles from wood to fire-resistant asphalt. When lightning strikes your house, using shingles made of fire-resistant materials like metal, asphalt, or tiles can help put out the fire.

Keep your distance from concrete walls and floors. This is because there is metal wiring that can conduct electricity.