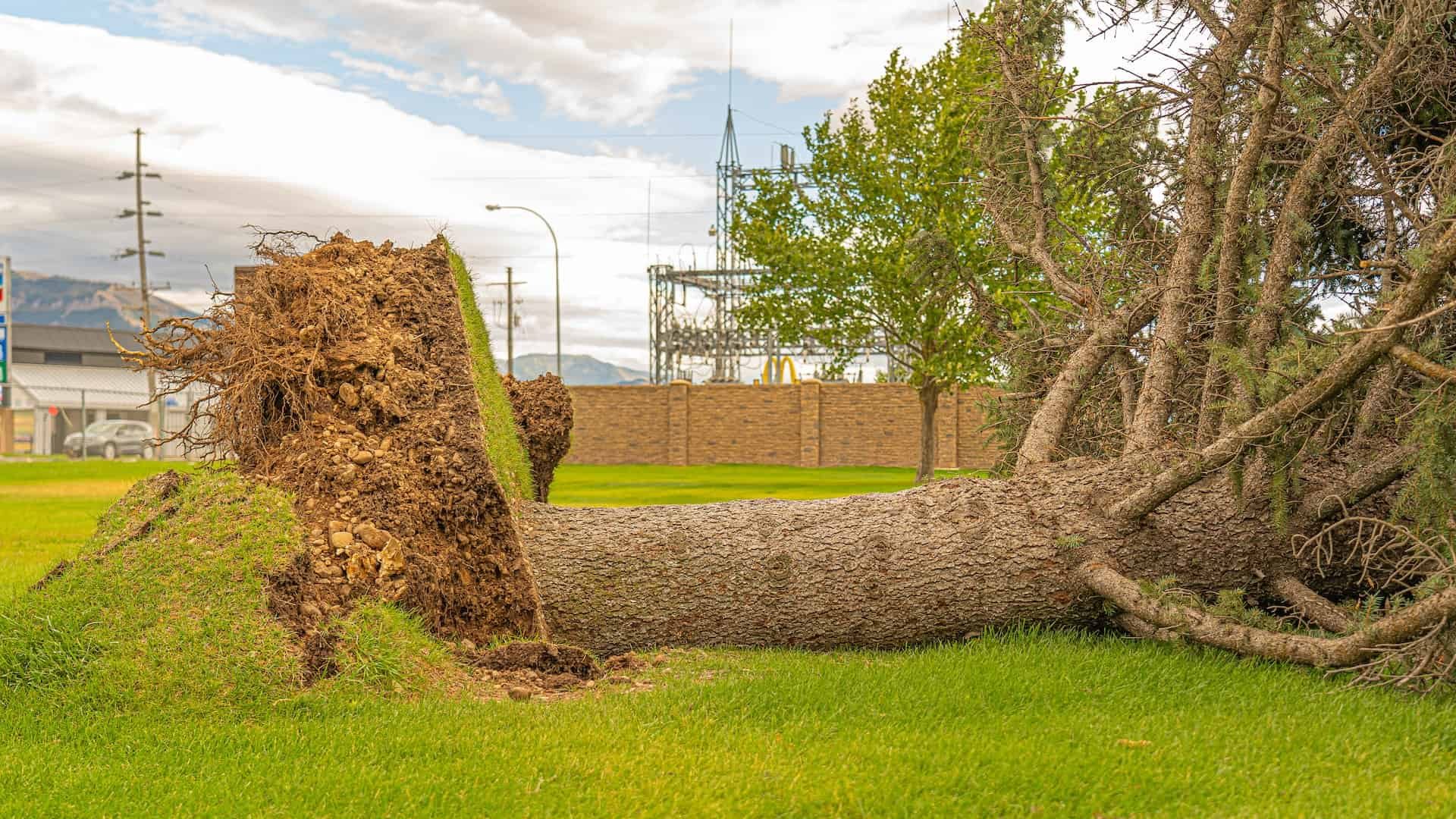 Trees frequently fall during storms, and most of these trees have a preexisting condition contributing to their collapse. The most frequent issue is tree limbs breaking during storms, which can leave dangerous hanging branches.

The following are some signs that your tree may likely topple down in a storm:

Read below as we go through each of these signs in detail.

Signs Your Tree is Going to Fall Over in a Storm

Below we’ve listed down some signs you can use to identify if your tree is going to fall over in a storm.

A tree may suffer root rot if it has dead branches because it indicates that the tree cannot feed its branches and leaves due to root rot. Then, to rescue itself, the tree loses its branches; because the fewer branches, the less nutrition is required.

Branch hazards include falling and dead branches. Those dead tree limbs might fall directly on top of your house or hurt someone with only one powerful wind blow. When they fall, dead tree limbs may be quite dangerous, and it is impossible to predict when they will do so. The next storm, or a clear, sunny day, might bring it down.

Hollow Spots in the Trunk

Inadequate pruning is frequently the source of tree cavities and is usually brought on by some internal rot in the tree. When high winds blow, the branch or even the entire tree will fall since it will eventually be unable to hold itself. There is hope, though, if you see nice, strong wood surrounding the hollow chamber. The tree won’t likely break off or go down in that case.

Trees with decaying roots may be in danger of falling. Since they are underground, it is difficult to identify this problem. Dead branches, fluttering leaves, or mushrooms forming at the base can all indicate root rot. Often, the best sign of decaying roots is a fungus.

The leaves on the inside should not be the ones to fall first. The leaves of a healthy tree usually fall from the outside. The tree may be at risk of toppling if you find leaves missing in the areas closest to the trunk.

When leaves start to fall from the interior, the root zone is likely weakened since leaves get their nutrients from that area. Without the necessary nutrients and moisture, a tree will become unhealthy and might collapse due to severe winds.

On a tree, cankers are fractures or areas of missing bark. These often manifest when a tree is dying. Thus it is better to have an arborist check it. The bark becomes significantly weaker when there are large fractures in it.

It becomes harder for the tree to maintain stability the weaker the trunk gets, which makes it dangerous. In contrast to the other warning indications we’ve described, the wood around the canker still has to be examined, even if it appears solid.

Cankers are dreadful signs and must be treated immediately, so you don’t want to delay them.

You’ll see that a healthy tree has branches that branch off in a U-shape. This gives the branches adequate room to spread out. Therefore, if you notice branches forming a V-shape and growing closely together, it is likely a bad sign. Trees are well into their hibernation phases in the late fall or early winter. The best time to view how the branches have developed is when the trees have shed their foliage.

Is your tree leaning by more than 15 degrees? It could be due to root or wind damage. But whichever caused the lean, the tree may need to be cut down. However, if the tree leans naturally because it developed at an angle, it might not be as hazardous.

The direction the tree is leaning is another factor to consider with leaning trees. Because winds come from the west, trees that lean toward the east are much more prone to fall.

Another sign of a tree that may topple over in a storm is exposed roots. Topsoil covers roots, which shields them from the weather and foot activity. Tree roots that are exposed are susceptible to injury by landscaping tools, such as being cut by lawnmowers or string trimmers.

Such root-cutting will result in the tree’s deterioration and eventual fall. As dangerous as it is for the tree, it poses a threat to everyone else as well. Just picture children and grownups falling over the roots. Some people can get major injuries based on what is around the tree.

Soft Spots on the Tree

Soft spots in the trunk or limbs indicate that your tree could be in trouble. Spots on the tree trunk frequently go unnoticed. Soft spots emerge when it has fungus, an infection, or a wound. These conditions put the tree under stress, which leads to weakened spots.

It’s crucial to remember that after handling such a tree, you must always rinse your hands thoroughly.

Broken cavities allow fungi to penetrate a tree. Once it starts growing, it begins to reproduce by using the spores that have formed in the bark’s cracks. Sadly, infected trees usually collapse quickly after fungal infection signs appear.

This implies that you must have it removed as soon as you see fungal symptoms.

Yellowing and browning foliage, slowing tree growth, and root rot are a few symptoms. Before it collapses, you might notice that parts of the branches are withering or drooping.

Regular inspections of your trees are important to ensure they don’t fall, especially during a storm. A tree that falls on your property can cause thousands of dollars worth of damage. This article discussed the signs that a tree might fall during a storm.